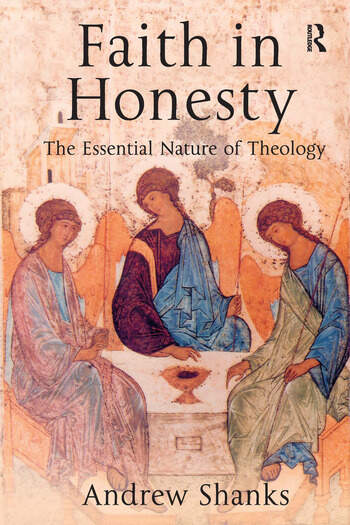 What really counts far more is 'Honesty'. Not just sincerity or frankness, but Honesty in the sense of a sheer openness to the Other.

A set of skills, Andrew Shanks argues, which the church has very much still to learn. True faith in God is faith in Honesty. But theological Honesty has three faces. It stands equally opposed to banality, manipulation, the mere disowning of history. This book thus presents a whole new approach to the doctrine of the Trinity.

A fresh stimulus to theological debate at academic, student and more popular levels. A Brief Note on the Question of Gender. Haught All rights reserved. Further reproduction or distribution is prohibited without prior permission in writing from the publishers. John F.

The full text of this chapter is available as a preview. Access to the full text of the entire book is only available to members of institutions that have purchased access. If you belong to such an institution, please log in or read more about How to Order. Science has now demonstrated beyond all doubt that our universe is unfinished. It is still coming into being. Discoveries in geology, biology, cosmology, and other fields of science have shown that nature is on a journey far from over.

Faith in Honesty: The Essential Nature of Theology

Knowledge that the world is a work in progress, I believe, provides a fertile new framework for thinking about the meaning of Catholic faith and life. Above all, hope will gain an expansive new horizon, one that can renew our spiritual lives and widen our sense of the coming kingdom of God. News that the universe is dramatic, however, has yet to penetrate deeply into Catholic sensibilities. Our devotional life still Our devotional life still presupposes an essentially static cosmos. The Church continues to nurture nostalgia for a lost original perfection and longs for union with an eternal present untouched by time and history.

Its ageless inclination to restore an idyllic past or take flight into eternity has bridled the spirit of Abrahamic adventure and dampened the sense of a new future for the whole of creation. Meanwhile, intellectual culture at large remains stuck in a stagnant materialist pessimism that also suppresses our native need for a future in which to hope.

This book asks what Catholic faith might mean if we take fully into account the fact that our universe is still on the move. What would it imply theologically if we looked forward to the future transformation of the whole universe instead of trying to restore Eden, or yearning for a Platonic realm of perfection hovering eternally above the flow of time? What if Catholic theologians and teachers began to take more seriously the evolutionary understanding of life and the ongoing pilgrimage of the whole natural world? What if we realized that the cosmos, the earth, and humanity, rather than having wandered away from an original plenitude, are now and always invited toward the horizon of fuller being up ahead?

The new scientific setting is one in which our universe must be pictured as still coming to birth. We live in the age of evolutionary biology and Big Bang cosmology. These fields of research, along with many others, have demonstrated that cosmic and biological origins were relatively rudimentary and that enormous spans of time were required to bring about the wondrous outcomes we call life, consciousness, and culture.

The universe has always 2 had a future and has always had to wait. We know this better than ever now that the new sciences have lengthened our sense of cosmic time beyond all previous imagining. Until recently, we had no idea of the almost fourteen billion years during which the universe has labored to reach its present state of being. Creation, we must now acknowledge, has not been instantaneous, and it has a future stretching toward we know not where.

This new sense of a cosmic journey, I believe, is much more momentous spiritually than most Catholics seem to have noticed. Since Christianity is a forward-looking faith and feeds off the future, Catholics cannot be content with seductive dreams of an initially perfect creation or with contemplation of an eternal now.

The ancient narratives of a promising God, one who always opens up a new future whenever dead ends appear, encourage us now to move beyond preoccupation with a lost Eden and an eternal present. Abrahamic faith directs us outward and forward into an open future. It instructs us to look for fulfillment up ahead, in the direction of new creation and a fulfillment of the cosmic process yet to appear. It encourages us to wait for the advent of a God who draws the world toward new being from out of the future.

Evolution and the cosmic process, I argue in these pages, sit comfortably in a religious setting grounded in wayfaring hope. Instead of diminishing our sense of divine transcendence, science now allows us to experience and cherish the all-surpassing love and power of God in a vitalizing new way. A science-conscious theology, therefore, can remain entirely continuous with the long history of our religious searching even as it widens the quest for fulfillment.

Evolution and cosmology do not require the termination but the transformation of our search for meaning and redemption. Without intending to do so, scientists over the last two centuries have raised the curtain to a new future for the universe and, along with it, spiritual space for a fresh throb of hope. However, science now gives these classic themes an unprecedented dramatic twist that tilts all of creation—and spiritual seeking—in the direction of a new future.

It makes room for a theology that 3 frames our unfinished universe with Abrahamic hope.


In any case, if there were ever an occasion for the renewal of hope, it lies in our new sense of a still-emerging cosmos. This book, however, is not an invitation to lessen our sense of indebtedness to the great traditions of Catholic thought and spirituality, but instead to think new thoughts about them in the context of our current scientific awareness of a universe that is clearly far from being completed. The following chapters apply and extend ideas of scientists, philosophers, and theologians who have awakened in me an appreciation of our newly enlarged cosmic horizons and who have nourished my own intellectual and spiritual life.

However, I take liberties with their ideas and carry them in directions their authors may not always have intended. Several such companions in this exploration are notable twentieth-century Catholic thinkers, above all, Pierre Teilhard de Chardin and to a lesser extent Bernard Lonergan and Karl Rahner.


What follows, however, is not a slavish exposition of their thought but my own synthesis based on four decades of reflecting with them and many others too on the relationship between theology and the natural sciences. Accordingly, I do not rely on direct quotations from their writings, except occasionally from Teilhard. The fact that Teilhard, Lonergan, and Rahner were all Jesuit priests, and the author a Catholic layperson who has taught for many years at Georgetown, a Jesuit university, is purely coincidental.

It is not a coincidence, however, that I share with these adventurous thinkers an awareness of the need for Catholic thought to take evolutionary science and cosmology more seriously than ever. What follows is not a systematic theology, a project that would hardly accord with the unfinished and, hence, unsystematic state of our universe. Rather, the objective is simply to acclimatize Catholic theological and spiritual concern to the new environment of a dramatic cosmos.

I attempt, with the inspiration of the aforementioned Catholic thinkers and many others, a change of tone that preserves the substance of Catholic faith, but that does so with a constant awareness of the new cosmological setting of all educated thought today. My purpose, then, is not to develop separate new tracts on Christology, the Trinity, the Church, sacraments, grace, sin, creation, redemption, and eschatology. Instead, I set forth a series of transitions toward renewal in Catholic thought that have already had uncertain beginnings but which I now want to carry further.

These are transitions from a prescientific to a more futurist—or anticipatory—understanding of Catholic thought than was conceivable throughout most of our theological history. I do not intend to abandon the sacramental or analogical character of Catholic thought but 4 to rethink it all in terms of the biblical theme of promise, and to do so in conjunction with our new scientific sense of an unfinished universe whose being and meaning are not yet settled. Just as post-Einsteinian physics does not discard Newtonian science as irrelevant but instead transposes it into a richer composition of time, space, and gravity, my objective here is not to forsake, but to reflect consistently on, the meaning of Catholic Christianity in the context of a universe still emerging.

Exactly what this transformation implies for each area of theological specialization has yet to be worked out. Here I can only point in a general way to what seems to me to be the need for a seismic shift in cosmological and metaphysical assumptions without which Catholic thought is likely to become increasingly irrelevant to scientifically schooled inquirers. This book contributes specifically to Catholic theology, but in a more general way, it is also part of ongoing conversations in science and theology.

Readers may be interested, therefore, in how I came to be involved in this field of interest and how I approach questions related to it. I recall now that it all began in my early twenties when I first started reading Teilhard. Ever since then, his vast writings, in spite of their incompleteness, have kindled my interest in relating science to Catholic faith. As early as , I felt the need to develop a course on science and religion for undergraduates, and I taught it almost every year until my recent retirement.

I have always loved science, even though as an undergraduate I majored in philosophy and did my graduate work in systematic theology. While I was teaching science and religion at Georgetown and writing books on the topic, I had to read and study a large amount of scientific literature, especially in the areas of cosmology and biology.